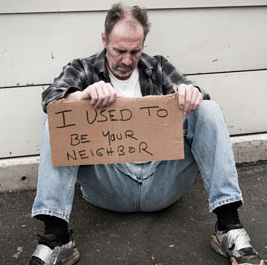 Over the past few decades, mechanisms of social exclusion and social control have made it increasingly hard for Australia’s homeless. Many texts discuss the issue of defining homelessness and it is now widely accepted there are several different kinds. Here, I will be talking primarily about Primary homelessness, which is also known as ‘sleeping rough’, where people sleep in cars, parks or other public spaces (Which Way Home? 2008: 18). On average around 105,000 people are homeless in Australia each night and around 15% of these are rough sleeper (The Road Home 2008: 3). The majority of homeless people list financial difficulty, domestic violence, family breakdown or substance abuse as the main causes of their homeless status (Which Way Home? 2008: 20). Homelessness remains a particular problem among Australia’s Indigenous people, who are over represented in their use of homeless services in all states and territories (Which Way Home? 2008: 20).

Debate surrounding the causes of homelessness often relates to two factors: the first are socio-structural factors, which are concerned with changing labour markets, poverty, the housing system, and the nature of the welfare state (Greenhalgh et al. 2007: 643). The second are individualist and psychological factors that reflect individual agency, including alcohol dependence, substance abuse or social and behavioural problems (ibid). While it is now widely agreed by researchers that homelessness is a process where these factors combine and contribute to an individual’s risk, this view does not appear to reflect the situation as portrayed by the media.

In her Australian study, Carole Zufferey found that media representations of the homeless were strongly influenced by conservative agendas that emphasised individual responsibility (Zufferey 2008: 359). Media representations generally construct deserving and undeserving homeless and focus more on individualist causes than structural ones (Zufferey 2008: 359). As the media play a key role in shaping public understanding of social issues, these attitudes are often shared by the Australian public.

A perception common in contemporary Australia is that homelessness is a lifestyle choice and that homeless people choose not to take advantage of services that are available to them. This sort of thinking was demonstrated recently when Opposition leader Tony Abbott was asked whether he would continue with the Rudd Government’s goal of halving homelessness by 2020 (The Road Home 2008: viii). In his response Abbott quoted the bible, from the Gospel of Matthew “The poor will always be with us” in an effort to demonstrate that the government cannot assist those who choose to be homeless (citation). This blatantly illustrates his lack of understanding of the issue, one that is shared by many Australians. As Morse (1992: 13) puts it,

The choice to become homeless is not an affirmation of an ideal lifestyle, but a means to obtain a sense of self control and dignity when faced with a lack of meaningful, safe or viable living alternatives.

Australians seem to have a range of ideological constructions surrounding the homeless, that they are lazy, dirty and untrustworthy, for example. These assist the processes and practices that exclude homeless people from social life and limit their ability to participate in society.

When examining a widespread, public issue such as homelessness, it is important to look at the discourses that are at play, when policy is being implemented. Discourse refers to the rules, systems and procedures which help produce and form knowledge about the world (Hook 2001: 522). The rules of discourse govern the way that a topic can be meaningfully talked and thought about. It is therefore linked to the exercise of power, because it ensures the reproduction of the social system, through forms of selection, exclusion and domination (Young 1981: 49; Hook 2001: 522).

In policy responses, there is often a common sense assumption that all citizens aspire to be competitive, independent, self responsible, hardworking and morally autonomous individuals (Zufferey 2008: 362). In Australia, there is an unspoken assumption that these are the qualities needed for citizenship. This is evident in that the overall aim in many policies and services is for individuals to be governed into a state where they can self-regulate their behavior without the need for direct intervention by the state (Gilbert 2008: 109).

In 2008, two policy papers were created by the Australian government in response to the current situation. The first was ‘Which Way Home: A New Approach to Homelessness’ which aimed to examine a range of perspectives on homelessness in order to inform further policy (Which Way Home? 2008: 8). From this, a second paper was developed, entitled ‘The Road Home: A National Approach to Reducing Homelessness’ which outlined the governments strategies for the future. Throughout both of these texts, there is the heavy promotion of moving people into the paid labour market, so they can be independent members of society. In Which Way Home, it states,

Stable long-term employment should be the ultimate goal for most . . . . With proper support, people can become more resilient and better able to manage their personal, financial and housing needs, and gain the confidence and skills they need to participate in mainstream economic and social life. (Which Way Home 2008: 14)

While the aim of many of the proposed programs is to support clients by improving their independent living skills, they are still deeply embedded with assumptions about control, surveillance, containment, independence and self-determination (Greenhalgh 2007: 646).

It is important to question who benefits from these programs and whose interests are being served. Is it the homeless who will benefit from these policies, or are they implemented for the bourgeoisie, who feel threatened by the presence of ‘others’ who do not conform to the status quo? Policy responses such as those listed above may also be seen as an attempt to reduce expectations of what the state will provide by promoting the ideas of the personal responsibilities required for citizenship (Beresford et al. 1996: 179).

Neo liberalist discourse appears to be pervasive throughout the proposed policies which are littered with management orientated methods and techniques (Anker 2008: 37). It can be seen that such methods are being implemented in the interest of efficiency and productivity, as opposed concern and assistance for people who have a range of problems and lack the tools that allow them to participate in social life. There is a sense that these individuals are seen as objects of policy as opposed to people who need care and resources. Policy makers also seem unaware that these people often do not lack the competence to participate in society; however their participation is undermined by dominant culture and ideologies that prevent them from doing so (Beresford et al. 1996: 193).

A shortage of affordable housing has been identified as a major contributing factor to homelessness in Australia. Increased house prices and rentals have put financial pressure on both individuals and families and some find they are unable to afford their current living arrangements.Between 2002 and 2007, the number of families seeking assistance from homeless services in Australia increased by 30 per cent (Which Way Home 2008:12). This suggests that policy responses to housing in Australia are under developed and indicates that affordable housing for those in low income brackets is in extremely short supply.

The government played a key role in creating this shortage by reducing its investment in public housing over recent years. It is estimated that between 1994 and 2004 government funding for the Commonwealth State Housing Agreement (CSHA) fell by 54 per cent in real terms (Judd et al. 2005: 246). This demonstrates where the government’s priorities lie. Instead of investing in housing, which would assist the homeless and many low income earners, they continue to reduce their spending in this area. Certainly in the Howard years, this could be seen as a strategy to create a budget surplus, which could then be distributed via tax cuts that disproportionately benefit the wealthy.

Homelessness is sometimes viewed as a complex problem attributed to the clients, not to the systems they have access to (Conover et al. 1997: 258). However, as demonstrated, policies and infrastructure which aim to reduce its prevalence are often under developed, impractical and show a lack of insight into the lives of those they are designed to help. Even if the infrastructure was developed, it wouldn’t stop the government and the public acting on pre-existing discourses that say that homeless people are not entitled to participate in society

Numerous and diverse factors contribute to homelessness in Australia. Homelessness has been maintained in the past due to ideological constructions that promote processes of exclusion (Morse 1992: 14) and by the absence of policy responses committed to reducing its prevalence.

Future challenges lie in the further development of existing policies and integration of services and programs that together can provide comprehensive and innovative solutions to homelessness. Further understanding of the issue through research will also contribute to better policies and help to address practices that lead to social exclusion