Homeless in Melbourne’s CBD to be given immediate housing under $9.8m State Government plan 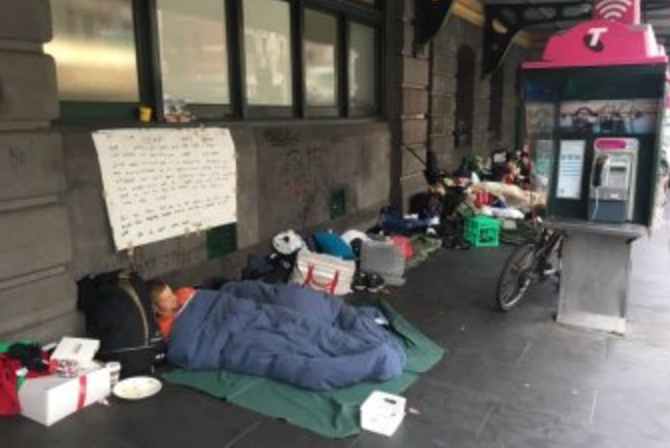 A $9.8 million package to help clean up homelessness on the streets of Melbourne and move people into transitional housing has been announced by the Victorian Government.

It comes after authorities recently attempted to remove a camp of homeless people outside Flinders Street Station who had spreading their bedding and belongings across the footpath.

Forty people will be given immediate transitional housing under the plan while new housing is built.

Housing Minister Martin Foley said 30 new permanent modular homes would be built on public land by the end of the year.

“There’ll be no reason why a rough sleeper in the city cannot this evening move in towards transitional housing with a guarantee that over the next two years there’ll be permanent supported housing available for them,” he said.

Mr Foley said the transient homeless population was about 250 in Melbourne’s CBD.

“We want to make sure the people that are rough sleeping in the central city district know that living on the street is an unhealthy and unsustainable way of living,” he said.

“Living rough in the central city district is in no-one’s interest. Particularly for those people that are homeless.

He said Mr Nicholson would coordinate services currently available to the homeless in the city.

“We have many, many services in the central city area, the sad truth is some sustain people in homelessness,” he said.

“If it was good will and good intentions that was all that was needed to end homelessness in the city it would have been done a long time ago.

“What this approach will do is to make sure we don’t spend our resources on sustaining the homelessness lifestyle and instead we end homelessness in the city.”

He said once homeless people were given housing they would have access to specialist support, such as mental health and drug and alcohol services.

“Sustaining people on the streets is not a long-term solution to a housing crisis,” he said.