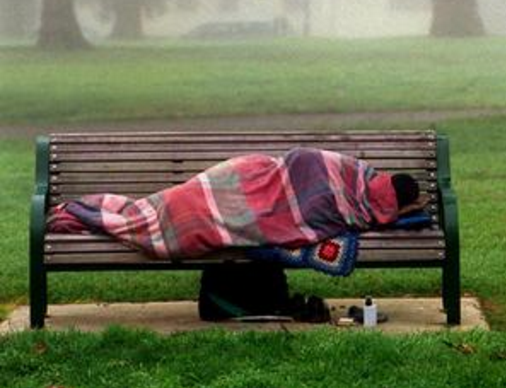 After a week during which Melbourne’s City Square has been occupied by a camp of homeless people protesting about their treatment and their plight, young writer David Allegretti’s account below tells but one of the human stories behind Australia’s homelessness statistics.

There are more than 100,000 other such tales. As we walk past people who are evidently homeless, many of us wonder about what has led to them being in this difficulty and distress. We should realise that each of us is but one or two mistakes or some mongrel misfortune away from catastrophe, as “Shaun”, the man who told his tale to David, shows.

The odds are cruelly worse for some; a quarter of the people without a safe and stable home are Aboriginal and Torres Strait Islander Australians, while almost a third was born overseas. About 45 per cent of the homeless are women – many of whom are escaping domestic violence. And more than four in 10 people without a home are younger than 25.

In our nation, one of the world’s wealthiest, about one in every 200 people is without a safe home. Most are in temporary lodgings – boarding houses, supported accommodation or staying with other households – but thousands are living on the streets.

Our politicians are well aware of the problem. After Kevin Rudd first became prime minister back in 2007, he ordered a White Paper into the issue, which led to a multibillion-dollar policy to halve the number of people without a home by 2020. The number has increased.

As we head to a federal election, it is to be hoped that those who would seek to make laws for us in the next Parliament make homelessness a priority. So far, lamentably little has been said about it.

Given the marathon nature of this campaign, though, there is time for it to become a focus, and voters and others should insist on it. We can use social media, call candidates offices, write to newspapers and participate in online media forums. People can and should make a fuss about it in front of TV cameras, should they happen upon a politician doing a street walk or some such.

There are many charity organisations, often supported by philanthropic generosity and by volunteers.

But fixing homelessness is fundamentally associated with public policy – it involves not only housing, but services to deal with physical and mental health, employment and education. There is a direct link between homelessness and poor health; on average, people without a safe and stable home have three chronic illnesses. Diabetes, heart disease and depression are particularly prevalent.

Because there is a range of causes of homelessness and because it involved so many other issues, it is thought to be devilishly complex and difficult to solve.

But that is not the case; a radical and beautifully simple solution has been found in some parts of the US.

It turns out that the most effective – and economical – way to solve homelessness is, well, to give homeless people a home. The policy is called Housing First and was created by a social researcher called Sam Tsemberis.

It has proved so effective that it has pretty much eradicated adult homelessness is a number of cities and states.

Taxpayers are winning, too. Before going with Housing First, Utah was spending an average of $20,000 a year on each homeless person. By first giving them stable homes, and only then providing services to support them in dealing with problems including mental ill-health and substance misuse, that has fallen to $8000. It has also worked in New Orleans and Phoenix.

So, it’s a policy that really should appeal to fiscal conservatives and to social progressives, because it solves such a pressing human problem – and at a far cheaper cost than the failed approach with which we have, by and large, persisted.

When something works, we should adopt it. A recent study by Melbourne-based Sacred Heart Mission adds to the argument for emulating Utah. A four-year pilot program in which long-term homeless people were given stable, safe accommodation and then back-up services and counselling:

Three-in-four participants were still in stable housing a year after the program ended, compared with fewer than 60 per cent of the control group that received existing services under the old model. There was a fall of 80 per cent in the need of the participant group for emergency health services during the four years, while the needs of the control group (which continued under existing policies) increased by a fifth. The savings to taxpayers were more than $17,000 a year per participant.

It is important to note the policy is not suitable for young people – they need added supports and services.

The key to the success of Housing First is in its very name – it is not until people are in a safe home that other, associated issues can be properly addressed. Surely there is sufficient evidence to suggest that there should at least be a nationwide trial of the policy here in Australia. Surely that is something beyond party politics, something that Malcolm Turnbull and Bill Shorten should unite on before the election.