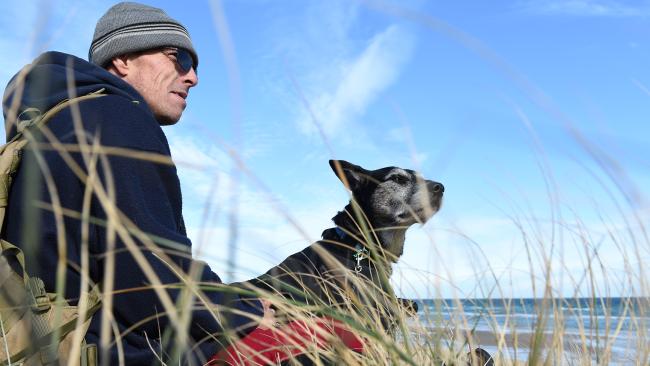 Homeless man Dougie (36) and his dog ‘Hooch’ (11). Doug is getting help from a dog rescue group, but is desperate for permanent accommodation for himself and Hooch. Picture: Jason Sammon Thursday 4th June 2015

HOOCH is definitely a “bitzer”.

There’s more than a touch of Irish wolfhound along with “bits” of a few other breeds thrown in.

But when long-term homeless man Doug looks into Hooch’s brown eyes and ruffles his black and brindle coat, he sees a faithful mate who has been there through thick and thin.

“He is my friend. He is my whole world,” Doug told the Leader.

Hooch has been a constant companion since Doug helped rescue him from an abusive master about eight years ago.
Other Stories

Doug, who is sleeping rough in the Frankston area, has taught himself to play guitar and takes Hooch along when he goes busking.

He is touched when strangers offer to buy dog food, adding: “People giving dog food means more than a $5 note.”

Doug’s devotion has impressed members of the Victorian Dog Rescue group, which has helped with vet bills, dog food and a blanket for Hooch.

“I get a tear in my eye – I’m not used to people being naturally nice,” Doug said of the group’s support.

Dog rescue group member Rick Mayers said Hooch clearly pined for Doug if he was not constantly around.

But he said Hooch had also been a hindrance to Doug finding permanent accommodation.

“It has proven difficult – the (accommodation) system is not set up to really allow for pets or if it does, it puts them at the bottom of the list,” Mr Mayers said.

Doug, 36, has been homeless since he was 14 when his family disintegrated following the death of his mother.

A wiry man who has suffered from anxiety and depression, Doug is clearly distressed even recalling when Hooch was stolen a few years back before the pair were reunited.

He desperately wants permanent accommodation for himself and his companion.

“The odd places that do allow dogs get snapped up that quick,” he said.

Doug is frustrated by his inability to find suitable accommodation, adding: “It’s a never-ending story.”

Since October 2015, Dougie and Hooch are now accommodated at a homeless shelter run by one of the directors at The Homeless Project.