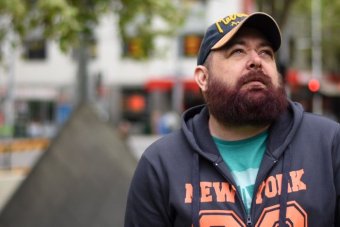 Richard Carrie is a street artist in a very literal sense: for the past eight months, he has been sleeping rough on the streets of Melbourne.

“The hardest thing is just being safe at night, that’s about it,” he said.

“My days are fine, days are like anybody else. I get up and I paint, I busk.”

The 39-year-old has struggled with anxiety and depression, and found it difficult to hold down a job.

“I’m a nice enough guy and I don’t get angry or anything, but I get really wound up if people tell me what to do with a job and I stress about it and worry about it,” he said.

“Eighty per cent of homeless people you’ll have here in Melbourne have mental health issues.

“It’s not about them being scumbags or lazy or criminals or just drug addicts — it’s a mental health issue.”

Earlier this year, Rich’s story was featured on a Facebook page, Homeless of Melbourne, which shares photos and personal stories of those sleeping rough.

“Literally, the response I got after a week — I got people coming down visiting me, checking that I was OK, just having a chat,” he said.

“It just makes you feel like a normal human being, which is amazing.”

PHOTO: Mr Carrie was blown away by the support he received after telling his story. (ABC News: Stephanie Anderson)